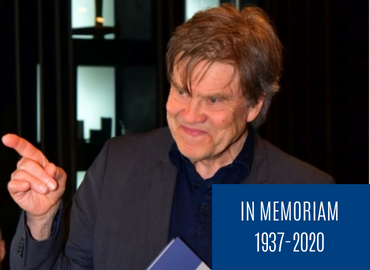 Victor was born in Kaunas, Lithuania on August 1, 1937, his father–a Lithuanian, and his mother–an Estonian.  World War II forced the family to flee their homeland. Evading capture by both the Nazis and Soviets, they finally ended up safely in a displaced persons camp in Germany, where Victor spent his youth.  After immigrating to Canada, Victor obtained his B.Sc. degree from the University of Alberta in 1959. and a M.Sc. degree from Berkeley in 1961 under the guidance of Professor D.S. Noyce.  He obtained a Ph.D. in 1965 from the University of Oregon under the guidance of Professor V. Boekelheide, and afterwards pursued a postdoctorate with Professor O.E. Edwards at the National Research Council in Ottawa.  In 1967, Victor joined the University of Waterloo becoming an associate professor in 1971, a full professor in 1979, and assumed the Monsanto/NRC research chair in 1992.  While at Waterloo, he made famous the Directed Ortho Metallation (DOM) reaction which has been applied to the synthesis of natural products, pharmaceutical drugs and agricultural products around the world.  Queen’s University in Kingston, Ontario became Victor’s new home in 1998 where where he assumed the Alfred Bader Chair of Chemistry.  He became emeritus in 2009 and founded a chemical synthesis research company, Snieckus Innovations.  All throughout his career Victor was always on the move, either consulting for most of the world’s pharmaceutical and agricultural companies, or being headline speaker at international organic chemistry conferences. He became a Fellow of the Royal Society of Canada in 1993, a Fellow of the Lithuanian Academy of Sciences in 1999, and a Fellow of the American Chemical Society in 2009.  He served as an editor for a variety of academic journals, most notably Synthesis and Synlett, was the president of the International Society of Heterocyclic Chemistry in 1985, and chaired the American Chemical Society’s Organic Division from 1989–90.

Having met fellow Balts Drs. Jaan Pesti and John Dunčia while consulting for the DuPont Pharmaceuticals Company in Delaware, Victor enlisted the help of Professor Eugenijus Butkus of Vilnius University, and together, the four of them organized the first Balticum Organicum Syntheticum (BOS) at Vilnius University in 2000. Although there was some trepidation by some on whether such an international conference would succeed, Victor was the perpetual optimist and pushed the team forward.  And thus the first BOS was born, and thanks to Victor, it was able to host Nobel laureate Professor Ryoji Noyori and future Nobel Laureate Barry Sharpless at the inaugural meeting. And it was Victor who insisted that each BOS should in some manner convey to international attendees the warmth, culture, and unique flavor of the Baltics.

Victor was a true Balt at heart, and he often quoted from Czesław Miłosz’s The Issa Valley, a novel and memoir of the Nobel laureate’s boyhood in pastoral Lithuania.  Notwithstanding his Baltic heritage, Victor was also a proud Canadian, always inserting a slide or two during his lectures about Canadian geography, culture, and of course—endless snow!  He himself actively participated in the country’s favorite sport–ice hockey and somehow managed to keep all of his front teeth. Victor always enjoyed having a beer in the company of good friends after a full day of consulting or conference lectures.  He was also an aficionado of jazz, and if there was a jazz concert in town that evening, you better take him there!

Victor loved life and loved people.  He took a keen interest in every person that he met, whether undergraduate students at BOS conference poster sessions, Ph.D.s at industry consulting sessions and Gordon Research Conferences, or Nobel laureates whom he hosted at Balticum Organicum Syntheticum.  He was extremely thoughtful, bringing unique Canadian gifts and the famous “Snieckus Research Group” T-shirts to conference organizers, participants, and even Baltic presidents!  He took the utmost care in writing invitation letters to conference speakers, addressing them in their own native language, being fluent in so many of them including those of his ancestry.  He always traveled lightly with only one black leather shoulder bag, and how all his clothes and gifts fit into it will forever remain his secret.  He especially enjoyed introducing conference speakers and wrapping up conferences with hilariously entertaining and memorable photo-shopped slides.  It was that personal touch for which Victor will always be remembered.  Victor will be sorely missed by all of us on the organizing committee.