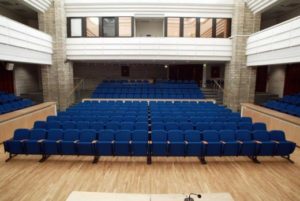 Located in the heart of Tallinn, the Estonian National Library, with its unique exterior and interior design, is the perfect place for organising conferences.

On 21 December 1918, the Provisional Government of the Estonian Republic took the decision to establish the State Library. The primary collection of the library was about 2000 titles necessary for lawmaking and government. The library was situated in two small rooms of Toompea Castle, the Parliament building.  In 1989, the National Library of Estonia regained its status as a parliamentary library responsible for serving the information needs of Parliament and Government.

The dream of having its own building originates from 1918. The library building at Tõnismägi was opened on 11 September 1993. The architect is Raine Karp and the interior designer is Sulev Vahtra. The eight-storey building, with two floors underground and a tower in addition, is a landmark between Toompea and Uus Maailm („New World“ is a town district). It was said before that the Library resembled a sacred building or a sanctuary, but now the National Library has developed into a real cultural centre where theatre performances, exhibitions and concerts take place.

Tallinn is the capital city of Estonia and a perfect conference destination. Apart from fantastic, historical ambience, it offers the widest choice of hotels, conference venues, activities and incentives. Tallinn is a rapidly developing compact city, with major landmarks, convention facilities and hotels within walking distance.

Tallinn Old Town is one of the best preserved Hanseatic town centres in the world. First established in the early medieval era, today’s Tallinn is an exciting mix of old and new. Ever since the days of Viking traders Tallinn has been a meeting point for various cultures and nations, so visitors coming from any direction are bound to find something familiar, and something exotic, when they explore the city.

Tallinn has good daily flight connections and Tallinn Airport is only 15 minutes’ drive from the city centre. With so much going for it, it’s no surprise that Tallinn has been among Europe’s fastest-growing conference destinations for the past several years running, particularly for small and medium-sized events.