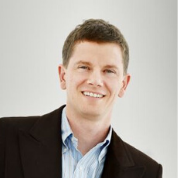 Tobias Ritter received his undergraduate education in Braunschweig, Germany, Bordeaux, France, Lausanne, Switzerland, and Stanford, US. He has performed undergraduate research with Prof. Barry M. Trost at Stanford, obtained his PhD working with Prof. Erick M. Carreira at ETH Zurich in 2004, and was a postdoc with Prof. Robert H. Grubbs at Caltech. In 2006, Tobias was appointed as Assistant Professor in the Department of Chemistry and Chemical Biology at Harvard, promoted to Associate Professor in 2010, and to Professor of Chemistry and Chemical Biology in 2012. Since 2015 he is director at the Max-Planck-Institut fuer Kohlenforschung in Germany, since 2018 as the Managing Director, and holds additional faculty appointments at RWTH Aachen and Massachusetts General Hospital, Boston. The Ritter lab focuses on late-stage functionalization chemistry, with a focus on fluorination methods and their application to molecular imaging. In 2011, Tobias founded SciFluor LifeScience, a clinical pharmaceutical company in Cambridge, Massachusetts.