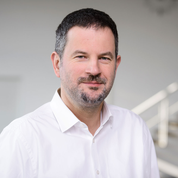 Born in 1971 in Pforzheim, Germany. He is Professor of Organic Chemistry at the Technische Universität Berlin. He received his diploma degree with Paul Knochel (Marburg, 1996) and his doctoral degree with Dieter Hoppe (Münster, 1999). After a two-year postdoctoral stint with Larry E. Overman (Irvine, 1999-2001), he completed his habilitation with Reinhard Brückner (Freiburg, 2001-2005) and was appointed as Professor of Organic Chemistry at the Westfälische Wilhelms-Universität Münster (2006-2011). He also held visiting positions at Cardiff University in Wales (2005) and at The Australian National University in Canberra (2010).

The Oestreich research group made fundamental contributions to catalytic carbon‒silicon bond formation with nucleophilic and, likewise, electrophilic silicon reagents. Martin Oestreich is probably best known for the work in silylium-ion chemistry. Recent accomplishments of in the Oestreich laboratories include Friedel‒Crafts-type C‒H silylation, transfer hydrosilylation, and kinetic resolution of alcohols by enantioselective silylation.