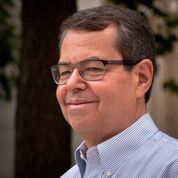 Professor Buchwald received his bachelor’s degree from Brown University and his doctorate from Harvard University. He was a Myron A. Bantrell post-doctoral fellow at Caltech with Professor Robert H. Grubbs where he studied titanocene methylenes as reagents in organic synthesis and the mechanism of Ziegler-Natta polymerization.  In 1984, he began as an assistant professor of chemistry Massachusetts Institute of Technology (MIT) He was promoted to the associate professor (1989), to professor (1993), and was named the Camille Dreyfus Professor in 1997. In July 2015, he became associate head of the Chemistry Department.

During his time at MIT, he has received numerous honors, including the Harold Edgerton Faculty Achievement Award of MIT, an Arthur C. Cope Scholar Award, the 2000 Award in Organometallic Chemistry from the American Chemical Society, and a MERIT award from the National Institutes of Health. He has also been the recipient of the Bristol-Myers Squibb Distinguished Achievement Award, the Chemical Abstracts Service (CAS) Science Spotlight Award, both received in 2005, the American Chemical Society's Award for Creative Work in Synthetic Organic Chemistry, and the Siegfried Medal Award in Chemical Methods which Impact Process Chemistry, both received in 2006. In 2010, he received the Gustavus J. Esselen Award for Chemistry in the Public Interest. He received the 2013 Arthur C. Cope Award from the American Chemical Society. In 2014, he was the recipient of the Linus Pauling Medal Award and the Ulysses Medal (University College Dublin). In 2015, he received an honorary doctoral degree from the University of South Florida, and also received the BBVA Frontiers in Knowledge Award in Basic Sciences (2014 Award). He was recently selected to receive the 2016 William H. Nichols Medal. In 2000, he was elected as a fellow of the American Academy of Arts and Sciences and, in 2008, he was elected as a member of the National Academy of Sciences. He is the co-author of more than 435 published or accepted papers and 47 issued patents. He serves as a consultant to a number of companies and is an associate editor of Advanced Synthesis and Catalysis.

Buchwald's interests lie in the development of new methods and techniques in organic synthesis based on transition metal catalysis. This work combines elements (no pun intended) of organic synthesis, physical organic chemistry and organometallic chemistry. Applications to problems in areas such as asymmetric catalysis and bioconjugation are being developed in his laboratory. Much of the chemistry that he carries out uses catalysts based on either copper or palladium.